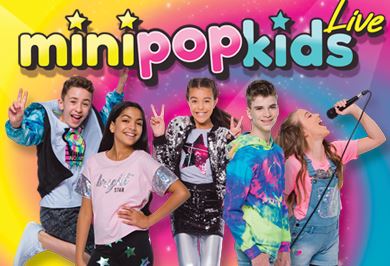 The Mini Pop Kids have been covering family friendly versions of the hottest pop songs since the early 1980s. (Yes, they are the ORIGINAL kids cover group, on K-Tel Records, the original Spotify playlist!

Now, today's parents are thrilled to continue to share that love with their children, at their
first concert experience.

This high-energy interactive concert will have everyone dancing as the Mini Pop Kids rock the house. Their clean covers are from today's hottest pop stars including Dua Lipa, Olivia Rodrigo, BTS, Justin Bieber
and more! With non-stop singing, dancing and interactive fun, this show is sure to leave everyone,
young and old wanting more.